What is Bulimia and how to handle it 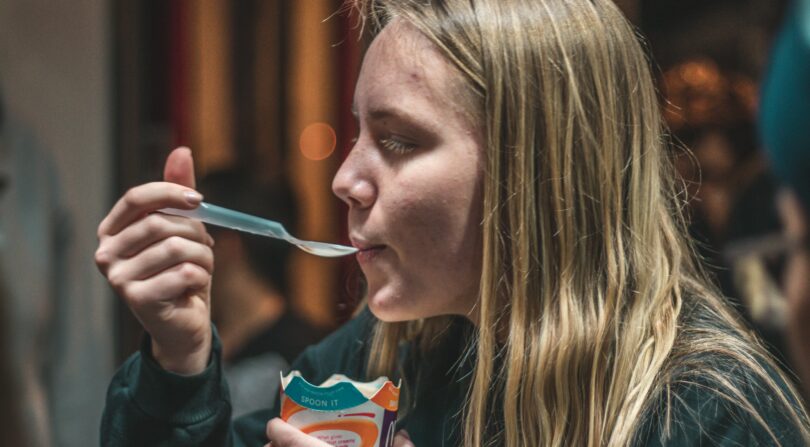 Bulimia is a devastating, food focused, psychological disorder that can be life threatening if left untreated. It is typically displayed as a vicious and ongoing cycle of bingeing and purging food.

In the binge phase, someone will uncontrollably consume a large amount of food in a very short period of time. Often these will be poor food choices that are high in saturated fat, or very high in sugar such as pizza or donuts. If you could picture someone aggressively searching through their fridge and pantry, before loading the kitchen table up with junk food and sitting down to rapidly consume large portions, then this wouldn’t be an image too far from the truth. Bulimics wouldn’t have trouble consuming an entire tub of ice cream or multiple packets of chips in one sitting.

After exhibiting such eating patterns, someone suffering from bulimia will become saturated with guilt and disgust and then feel the need to force themselves to vomit or expel the food from their body, using medication like laxatives. This is the purge phase, and is usually done in an effort to avoid any weight gain. In the mind of a bulimic, there is a never-ending battle between the desire to eat and the desire to avoid weight gain.

The action of overeating, feeling incredibly guilty, and then purging can often be an outlet if you’re not coping well with or negative experiences or situations in your life. It is much like someone turning to alcohol or drugs as an escape route from their reality.

Other paths used to also avoid weight gain include:

With many people feeling too ashamed to seek medical attention, these figures are no doubt much higher than what’s shown on paper.

If someone is suffering from bulimia, their binge eating is usually (but not always) triggered by emotions such as sadness and/ or stress when reminded of a particular situation or event. Depression is a strong underlying factor linked to eating disorders. Bulimia can be a common condition amongst those that experience bullying, feelings of worthlessness or loneliness, are in abusive relationships or experience other forms of belittlement.

The factors that lead to bulimia are incredibly complex and vary from case to case. Often the thought process of a bulimic is that they’re incredibly embarrassed and ashamed for their actions, especially if caught in the act of eating copious amounts of food. Their thought patterns are extremely destructive, often viewing themselves as incredibly weak, fat or disgusting.

For someone that has very low self-esteem, lack of confidence or have body-issues related to their appearance, they are more at risk of developing an eating disorder. The rise of social media and the illusion of perfection as displayed in photographs has also seen a rise in conditions such as bulimia.

If you’re concerned that someone close to you may be suffering from bulimia, you should look for the following signs:

Loss of nutrients from consistent purging

Over time, frequent vomiting can result in a lack of nutrients being distributed and available for all the systems in your body. This includes calories, vitamins and minerals, and protein for growth and repair of all cells and tissues.

On top of nutrients lost in vomiting, nutritional levels are often very low to begin with in the types of food binged on, and can be described as very refined junk food.

Common signs of malnutrition from excessive vomiting, use of laxatives, diuretics or enemas include:

Bulimia can cause incredible damage to your health, affecting your digestive system, functioning of internal organs and overall mental health.  Your relationship with food can become an overriding obsession, wherein it becomes difficult to achieve anything in many areas of life, and difficult to even carry out normal day-to-day functions. This is not only extremely damaging to your own health, but also to your loved ones.

Of course each person’s situation varies greatly from that of another’s, but the most prominent consequences that come about from eating disorders such as bulimia include:

There is a certain set of criteria that must be met in the diagnosis of bulimia. You can expect the following criteria to be examined by your doctor during an examination:

A full physical evaluation must take place, including the observation of symptoms commonly related to bulimia, such as hair loss, stained teeth, or tenderness in the abdominal region from the presence of stomach ulcers. Low body weight is often associated with bulimia, but is not always the case. Your doctor will take your blood pressure, test your blood and/or take urine samples to recognize any chemical imbalances or nutritional deficiencies.

Because mental state is also incredibly relative to the diagnosis of bulimia, your doctor will likely refer you to a specialist psychologist who is trained in the area of eating disorders. In any event, medical professionals still need to rely on honesty from the patient in order to successfully diagnose bulimia. This is an ongoing challenge and often leads to misdiagnosis due to the feelings of shame associated with this eating disorder.

With treatment plans, there will often be a combination of medicated approaches, and what’s called cognitive-behavior therapy. Of course the type of approach your doctor will take is determined by the severity of the condition and how long the condition has been present. Responses to each type of therapy can be dependent on a variety of factors such as pre-existing mental conditions and particular personality types. Someone that has OCD or is a perfectionist might struggle with specific treatment plans.

Antidepressant medications work by increasing levels of neurotransmitters such as serotonin and dopamine, which are known to increase mood. As bulimia is often borne out of feelings of depression and anxiety, taking antidepressants may help to break the destructive binge-purge cycle, by controlling thought patterns, and reducing the urge to engage in such behavior.

The most common antidepressant prescribed for bulimia is Fluoxetine, which contains serotonin, a hormone responsible for mood regulation, controlling emotions and in particular appetite. Many bulimics are found to have low levels of serotonin, which has been shown in studies to lower mood and increase irritability and even aggression. It’s interesting to also note that low serotonin ignites impulse control disorders.

Some people struggle to open up to complete strangers and discuss issues which are incredibly personal, such as eating disorders. However, others find this much easier to do than to open up to those that are close to them. Psychologists can help manage your eating disorder and bring you back on track to good health.

CBT helps to break down your destructive thought patterns and also assists in recognizing the link between thought, mood, and action. You will work closely with a therapist that is specially trained in assisting patients with eating disorders and will help you to understand your condition. You will be provided with tools to:

Often programs will run from between five to twenty weeks and are specifically structured to slowly break down your challenges and obstacles that you’ve been dealing with alone up until this point. You will also be given tasks to complete as homework following your sessions.

In studies it has been recognized that intervention by way of psychotherapy is most effective in reducing binge eating and purging, than by medication alone. The chance of relapse is reduced, as the coping tools can be used for life, whereas once medication runs out, you may feel that you’re left on your own.

While antidepressants successfully block many negative emotions, they are certainty not recommended for long-term treatment. Engaging in activities that promote feelings of wellbeing is a much more sustainable approach when it comes to dealing with overwhelming emotions.

After completing CBT, you will learn that the key to success in controlling bulimia is in blocking your thought patterns and switching off your mind, if only for a few minutes! Your psychologist might recommend activities that help to achieve a more peaceful state of mind.

Yoga is one way that helps you restore a much needed connection with your own body. This is achieved through breath work and certain strength postures. Classes range from complete beginners right through to advanced.

Yoga encourages self-love and self-worth and certainly boosts your confidence when surpassing challenging postures that require extreme focus, balance and attention. You begin to realize just how powerful your mind is in overcoming obstacles!

Another powerful message learnt from yoga is the ability to let go. This is often experienced when you’re in postures that involve a strong release of tight muscles, and you have no choice but to surrender to the position, resulting in extreme bliss when coming out of the posture!

While yoga is an ancient practice that has been around for thousands of years in India, it’s only relatively recently that science has turned to study its many incredible benefits, particularly from a psychological point of view.

In one study, titled Yoga for Psychiatry and Mental Health: An Ancient Practice with Modern Relevance, psychological benefits of yoga are noted as:

It’s exciting to know that yoga is already being recommended by medical professionals as part of treatment programs of mental disorders, and certainly holds an important role in forging a healthy lifestyle following the battle with bulimia and other eating disorders.