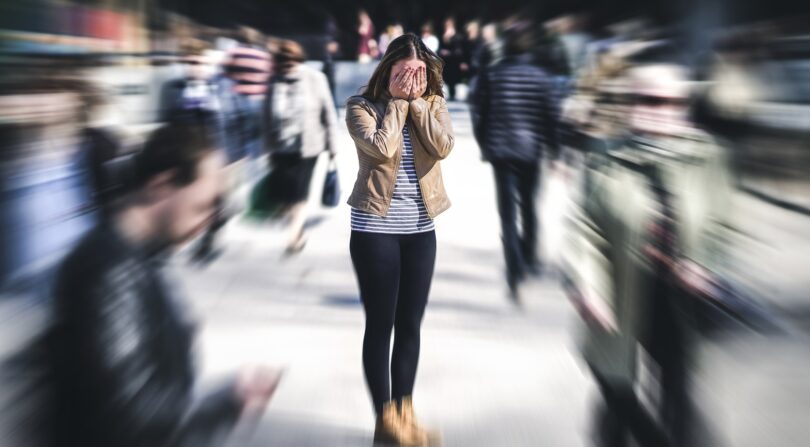 This article will serve as a guide on the causes, types, and treatments for anxiety.

Anxiety can present in many different ways. For some people, it is described as ruminating thoughts and overwhelming worries. For others, it’s a sick feeling in the stomach or a pain in the chest.

Like passing feelings of sadness or anger, moments of anxiety can be perfectly normal. Everyone experiences anxiety from time to time and it often goes away on its own, or can be managed until the cause of it subsides.

A woman waiting on test results may feel anxious until she gets answers. It’s normal for the anxiety to last until the wait is over. Another example is someone who is on a first date or in a job interview. It is very common for someone in a new situation to feel at least somewhat nervous or anxious.

However, when anxiety goes beyond the norm and begins to interfere with everyday life, it becomes a concerning disorder. It’s helpful to first understand the causes and types of anxiety conditions. Once the type of anxiety is identified, then the best treatments can be considered.

So why do some people develop extreme, chronic anxiety issues? There are at least a few factors involved.

While anxiety itself can feel very similar, it does present in different ways. Here’s a look at the most common anxiety disorders people suffer with.

General anxiety disorder (GAD) is one of the most commonly diagnosed mental health disorders. According to the National Institute of Mental Health, nearly 6% of people will experience GAD during their lifetimes.

Common symptoms of GAD that therapists look for include:

GAD differs from other anxiety disorders because it relates to a variety of worries and anxiety in many situations. Other disorders are more specific, tied to specific fears or incidents.

Those worries might become even more catastrophic, such as fear of a fatal accident or terminal illness, with no apparent risk or signs that such things are likely to happen. These thoughts occur daily, if not constantly.

Over time, the fears and worries get stronger and stronger. The act of worrying can become a habit that’s difficult to stop. The ruminating itself may be an effort by the brain to solve or prepare for potential problems. However, it ends up causing much more stress in the long run.

A recent study looked at what is happening in the brain during GAD. The researchers noted that some of the connections in the brain that regulate anxious response are weaker in such cases. Normally the anterior cingulate cortex (ACC) would be telling the amygdala and other emotional parts of the brain to calm down. This doesn’t work well in a brain with GAD.

While GAD is the most common disorder, it’s only one of several types of anxiety issues.

Another common disorder that relates to anxiety is post-traumatic stress disorder, or PTSD. Around 8 million people per year deal with PTSD. This disorder is caused by complications in healing following a trauma. The anxiety issues are specifically caused by fears related to the event.

Many of the symptoms of PTSD are similar to GAD, but there are key differences. Common anxiety-related symptoms include:

However, unlike with GAD or other anxiety disorders, those with PTSD may have all or many of the following symptoms as well:

Similar to what’s been found with GAD, PTSD relates to a communication problem between parts of the brain. This may be why many of the symptoms of PTSD are similar to GAD. However, as the symptoms indicate, PTSD is a somewhat different disorder, because it specifically relates to one or more past trauma(s).

Another disorder with many similarities to GAD is social anxiety disorder, or social phobia. Around 7% of people have experienced this disorder in the past year.

As the name indicates, this type of anxiety specifically relates to social situations, and what others think of the person. This may lead to avoidance of social settings, which reinforces the fear and typically causes it to get worse over time.

Unfortunately, the isolation of social disorder can interfere with relationships, employment, and can make other disorders such as depression worse.

Some people may not think of obsessive compulsive disorder (OCD) as an anxiety disorder, but it certainly includes a lot of fears. Two to three percent of the population suffers from OCD, which can present in different ways. Most people are familiar with behaviors such as obsessively checking that the stove is off, or flipping a light switch a certain number of times.

OCD can also present as obsessive thoughts relating to specific worries. While this is somewhat similar to GAD, it tends to be combined with compulsive ways to soothe the worries. For example, someone may ask a therapist or a friend to repeatedly reassure them about certain fears. At other times, this soothing presents as the compulsive behaviors such as repeatedly checking locks.

While these are the most common related disorders, anxiety can present in many different ways. For example, someone might experience both PTSD and GAD. There are also several less common, but just as debilitating disorders, that relate to anxiety. These include the following:

If you are experiencing high anxiety symptoms, you can start with some basic steps to address the issue. You can also use these self-help skills while you’re looking for a therapist or waiting for a first appointment. Here are some ways that may work to decrease or manage feelings of anxiousness.

For more serious and ongoing anxiety, it may be important to seek professional care. Understanding the types of therapy for each disorder can be helpful in your decision making. Here’s a look at areas of treatment that may be helpful.

Many treatments use exposure techniques to help people overcome anxiety symptoms. Therapies for general anxiety, OCD, and PTSD may all include exposure activities. While this can sound frightening, it’s found to be a highly effective and helpful strategy.

Here’s a look at types of treatment that include exposure techniques.

Sometimes fears are irrational, or misperceived, and working through the fears in talk therapy can make a difference. CBT therapies work with the basic premise that thoughts influence emotions. By challenging thoughts, feelings can change, especially over time.

In somatic therapies, the focus is primarily on the physical experience in the body, rather than the thoughts relating to anxiety. Following this theory, anxiety and trauma symptoms present mainly in the body, so should be addressed accordingly. Therapists may work with clients on noticing, movement, relaxation, and breathing.

Struggles with anxiety can be overwhelming and debilitating. It affects millions of Americans, as well as their loved ones. Fortunately, understanding the causes of anxiety and types of anxiety can help determine what may help.Self-help techniques for anxiety, along with professional treatment, can make the difference between continuing to suffer or finding relief.