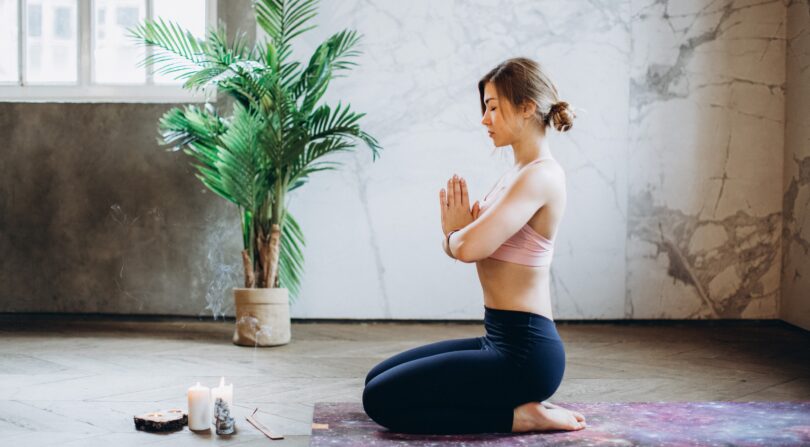 One of the most famous meditation scientists and teachers in the world, Jon Kabat-Zinn, defines meditation as, “The awareness that emerges through paying attention on purpose, in the present moment, and nonjudgmentally to the unfolding of experience.”

Meditation is tuning into the now moment and giving yourself the time and space to just be. Rather than thinking about the past, or worrying about the future, you stay in the present moment.

Meditators might start with being aware of their breath, just noticing the experience of air coming in and going out of the lungs. If the mind wanders, as all minds do, you notice that too, and then let those thoughts gently pass by as you focus back on the breath. Contrary to popular belief, meditating does not always mean having a perfectly content, quiet mind, but is the ability to keep focusing back on stillness and peace.

Some ways to meditate include:

One example of a guided meditation is called Loving Kindness. It’s based on an old script that has been followed for years in parts of Asia and is now very popular in the U.S. Loving Kindness is a form of guided compassion meditation and it’s proven to actually increase kindness in those who practice it.

One portion of this practice includes the following phrase, that meditators imagine someone they know and repeat this, or a similar, phrase to themselves:

There are many methods of meditating, but regardless of which kind you choose, the health benefits have been proven countless times.

Researchers at Harvard looked more closely at what repeated mindfulness activity does to the brain and found a common eight week meditation program actually thickened areas of the brain that related to memory and emotion regulation. They also found that meditating decreased cells in the amygdala, which signals the brain to regulate (or not regulate) fear and stress. This theoretically leads to less stress and anxiety. Those who completed the program confirmed the difference in their daily lives as well, and indeed reported that they felt better.

There are similar studies proving the benefits of meditation. The program many researchers often use to study meditation is called MBSR, which stands for mindfulness-based stress reduction. It’s offered by universities and other groups around the world and has a popular free online version.

This program by Palouse Mindfulness is designed by a certified MBSR instructor and is based on the original program by Joh Kabat-Zinn. It spans 8 weeks and outlines the following topics related to meditation:

The program is entirely free and open to the public. There are many similar programs online (in self-study, recorded or live formats) and in-person.

You might be asking, do all of the changes in the brain really have an impact in daily life? You bet! Here’s a look at some of the benefits regular meditators report.

Depression is a set of symptoms such as feeling sadness, hopelessness, and a decreased interest in activities of life. People with depression often find themselves in a dark place and having a hard time caring about much at all. They might stop getting in touch with friends, stay isolated even when they don’t need to, and quit caring about their hobbies.

While some people with depression respond to medications and therapy, many don’t. Enter meditation. Multiple studies have shown that mindfulness programs can be as or more effective than medications. People may feel a lifted mood, more energy and motivation compared to before they started meditating.

Millions of Americans deal with chronic pain issues. Medications don’t work for everyone and may be dangerous or addictive. Pain can become a vicious cycle—the pain is real, but over time causes frustration and hopelessness. These feelings then increase stress hormones, which in turn make the pain worse. Cycle, spin, repeat.

Meditation can interrupt this process. While relaxing the tendency to fight or avoid the pain, the meditator leans into the feeling and accepts it. Ironically, this helps relieve it. Many people with long term pain describe an immediate feeling of some relief, as well as more significant results over time. While it’s sometimes a last-ditch effort for people who’ve never been able to manage pain effectively throughout their lives, for some it’s the trick that finally works.

For kids and adults with ADD (also called ADHD), it can be hard to focus, stay organized, and keep up with life in general. For kids, it can lead to messy desks, forgotten or lost homework, and frustrated parents and teachers.

In adulthood, it might mean constantly losing your keys, misplacing your cell phone, or losing track of important items and paperwork. Adults may also struggle with arriving places on time and anticipated needed time on projects. Bosses and partners may lose patience.

Medications don’t always work for ADD, can start to wear off over time, and aren’t safe for everyone. Meditation is a novel alternative. It’s practicing the opposite of a distracted mind.

You’d think that people who have the most difficulty with concentrating would find it nearly impossible to meditate, right? Well, that wasn’t the case. One study where people with ADD practiced meditation for 8 weeks, through gradually increasing periods of time, found that meditators were able to improve concentration. They also reported lower levels of anxiety and depression. That makes sense, since dealing with a distracted mind can lead to daily frustrations.

People who meditate report reduced feelings of anxiety. This may be due to the natural changes in the brain, as well as changes in habit, which have a compounding impact on each other.

Many people suffer from anxiety. Whether it be constant worrying about life’s problems or dealing with past traumas and post traumatic stress, anxiety can lead to serious disruptions in our daily lives and happiness.

Anxiety often leads to a tendency to distract yourself, stay busy, avoid emotions, and generally try not to think about worries. That rarely works and often worsens anxiety issues over time. Meditation can help.

Meditation slows this process down and encourages staying present and noticing current experiences. This helps to slow down distracting thoughts and clears out the junk that is interfering with the natural healing or calming process. Meditation retrains the brain, correcting the brain’s misinterpretation that life is constantly dangerous.

University of Massachusetts researchers also found that meditation improved areas of the brain related to compassion, and self-awareness. Having a distorted self view and low self compassion contributes to issues like anxiety, post-traumatic stress, and depression. The ability to process and understand ourselves better can help with all types of mental health issues.

Ever heard of the fountain of youth? It used to be a common theme in fantasy novels and fairy tales, where characters would do whatever it took to stay young and beautiful. There may not be such a fountain outside of fiction, but we do have the key for one area of aging.

Sara Lazar, from the University of Massachusetts, is one of the top researchers on the benefits of meditation. In a Washington Post interview, she discussed the impact of meditation on brains as they get older. Many aging people notice that they begin to have trouble with processing, memory, and don’t feel as “sharp” as they may have when they’re younger. That’s because our mental cortex shrinks over time.

Lazar found meditation could change that. “In this one region of the prefrontal cortex, 50-year-old meditators had the same amount of gray matter as 25-year-olds.” So, meditation can actually slow or reverse some of the aging process.

Many people believe meditation can help, but don’t know how to get started. For every personality type, there’s a form of meditation. Here are some resources and approaches to get your feet wet.

How do I Meditate?

Many types of yoga are purposefully meditative. Combining movement and breath work with mindfulness can boost the benefits. There are yoga studios all over the world, in many small areas, and an abundance of classes online. You can start with small steps at home and build up from there.

If you work best in a structured setting, as many of us do, then an organized group may be best for you. Many college campuses offer various forms of meditation. Local Buddhist centers also typically revolve around meditation groups and practices. You don’t typically have to subscribe to Buddhism to attend. In the West, Buddhist programs are typically less like a religious service and may be structured more like a meditation class.

MBSR – In Person or Online

Universities also often offer, or may be studying, effects of MBSR. This can be helpful if you are dealing with stress or depression. And, since most of the meditation studies are based on it, we know for sure that it works.

Tai Chi is sometimes called “moving meditation.” If sitting still for long periods of times sounds undoable, you can get many benefits out of this moving practice. You may have seen it in the park, typically with older people looking to fight off arthritis. However, Tai Chi is beneficial at any age, and is known to help with brain support, movement issues, and stress. Qi Qong is a related practice similar to Tai Chi with similar results. Many classes may include both.

Your closest access to meditation may be on whatever device you’re using right now. More apps are released every day that include meditation practices. Find one that best fits your lifestyle, and start where you’re at right now—mentally and physically.

Meditation used to be thought of as a “woo-woo” practice that touted benefits not based in facts.  But the ongoing science, and everyday stories of those who practice it, can’t be denied. Meditation really does change the brain. Yours could be next.

Justin was skeptical at first. He didn’t like the idea of meditation. He felt his thoughts strayed too much, and he’d never be able to focus. But his wife, who’d been meditating since before they met, was adamant it would help him if he tried.

He started out slowly—just five minutes a day. He would sit quietly and follow the directions of a teacher. She’d prompt him to notice his breath, and as his mind wandered, to bring his attention back. As he’d expected, his mind would go off track at the slightest distraction, and he often felt like he was doing it wrong.

But after a few weeks he started to settle in and actually look forward to the meditation sessions. He wasn’t bothered anymore if he got distracted with his thoughts, but noticed that didn’t happen as much. He started sleeping better, felt his mood lift, and even his aches and pains improved.

Sally wasn’t as skeptical as Justin, but also had never tried meditation. Her therapist recommended it because not much else had worked for her anxiety. She was struggling with social settings and felt on edge much of the time. She started attending a local group that practiced a meditation called “Loving Kindness.”

This is a guided meditation, and has been studied and practiced all over the world. The leader would ask Sally’s group to send positive thoughts to themselves, their family and friends, and the world. Sally felt like she was just going through the motions at first, but after a few times practicing, she started to feel very calm and settled. Her anxiety started to improve and got better and better over time. She felt more patience where she used to get frustrated.

Justin’s and Sally’s results may seem too good to be true. Actually, these benefits are common. Meditation really does change the brain and that can change your life.