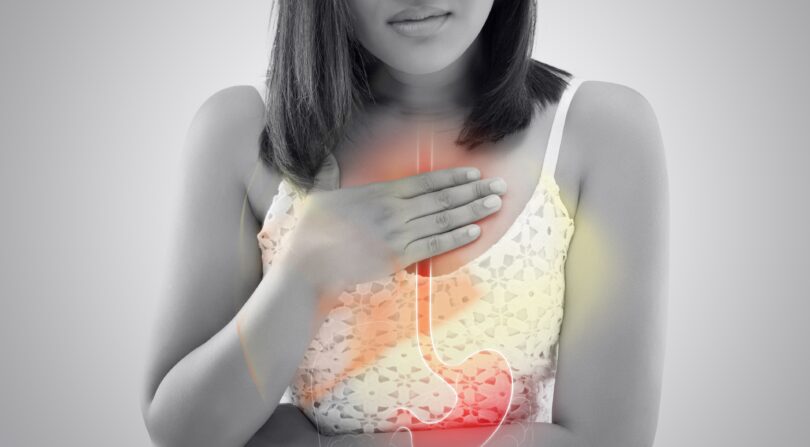 Acid reflux is the most common gastrointestinal disorder; more than half of adults experience it at least once in their life. According to The American College of Gastroenterology, over 60 million Americans have acid reflux and heartburn once a month and 15 million face this daily. If acid reflux occurs more than twice a week, the condition is referred to as gastroesophageal reflux disease (GERD). While reflux occurs mostly in people over 40 years of age, it can occur in children and infants too.

When we swallow food, it passes from the mouth into a tube called the esophagus, and then travels down to the stomach. At the entrance of the stomach or lower end of the esophagus, there is a ring of muscles that form a valve called a lower esophageal sphincter (LES).

The esophagus can resist the abrasion by food but cannot withstand acid coming up from the stomach. Thus, when the acid in the stomach passes the LES into the esophagus, which is referred to as acid reflux, people will experience pain, irritation, or a burning sensation in the lining of the esophagus and center of the chest. This chest discomfort is often called heartburn and, in some cases, may even resemble the chest pain of a heart attack.

Acid reflux can also cause a sour taste in the backside of your mouth and can lead to nausea, hiccups, cough, bad breath, bloating, and feeling of sickness. These symptoms will be increased if the person has a habit of lying down immediately after eating food.

When the valve separating the stomach and esophagus, called lower esophageal sphincter (LES) is weakened or fails to do its job, contents of the stomach regurgitates into the esophagus. This is known as acid reflux.

The symptoms of acid reflux mostly occur in periods of transient lower esophageal sphincter relaxation (TLESRs), which is a period during which stomach vents its gases. People with this disorder are more likely to experience symptoms during this period.

One of the most common causes of acid reflux is hiatal hernia. This is a stomach abnormality in which the upper part of the stomach and LES herniates into the lower esophagus. In the case of hiatal hernia, the diaphragm, which normally keeps the acidic content inside the stomach, is unable to perform this function and acid moves upward causing symptoms of acid reflux.

Other various causes of acid reflux are as follows:

Hiatal Hernia:
As explained earlier, hiatal hernia is caused due to displacement of the junction between stomach and esophagus. This is a major risk factor for acid reflux and reflux esophagitis.

Tobacco smoking:
There is an increased risk of developing acid reflux with tobacco smoking. Smoking causes damage to mucus lining, which causes more release of acid. Smoking also reduces the tone of LES and reduces the secretion of saliva, which when being produced in normal amounts, neutralizes the effects of acid. In addition, there is an increased risk of esophageal cancer with smoking. The duration and the amount of tobacco consumed greatly alters the risk percentage; the more and longer you smoke the higher the risk.

Alcohol Consumption:
Evidence suggests that mild to moderate alcohol consumption, more than 7 drinks per week, is linked to an increased risk of acid reflux.

Helicobacter Pylori infection:
The link between H. pylori and peptic ulcer disease is well established. However, the link between H.pylori and acid reflux is not as clear. Some research suggests that the presence of H. pylori infection actually decreases the risk of GERD. Therefore, more research is needed on the risk of acid reflux due to H.pylori.

Pregnancy:
Increased levels of progesterone causes relaxation of LES. This increases the risk of GERD in pregnant women by 40-85%. Pregnancy not only precipitates the symptoms, but may also worsen them. Symptoms usually occur at the end of 1st trimester and continue worsening till the end of gestation, at which point typically resolve after giving birth. Although symptoms may be severe in pregnancy, complications are rare to occur.

Genetics:
There is some evidence of the genetic cause of GERD. For example, a study on twins showed the risk of acid reflux in identical twins was increased by 435% and in nonidentical twins by 26%.

Medications:
In addition to NSAIDs, there are a lot of other medications that can increase the risk of GERD. These medications include antibiotics, ACE inhibitors, vitamin C, potassium, quinidine, anticholinergics, corticosteroids (both oral and inhaled), nitroglycerines, aminophylline, warfarin, statins, and calcium channel blockers (CCBs).

Scleroderma:
A connective tissue disorder may increase the risk percentage of reflux disease.

Those with a slow GI transit time have a higher risk of acid reflux. This is because the food is staying in the stomach for longer periods of time.

The most common signs and symptoms of acid reflux are heartburn, regurgitation, nausea, and sore throat.

Heartburn can sometime be confused with a heart attack, but can be differentiated by following patterns specific only to heartburn:

If your chest pain does not follow these patterns, is getting worse, or fails to improve with antacids, or if you are just unsure, call 911.

Classic symptoms of heartburn and regurgitation are enough for a doctor to diagnose acid reflux. If lifestyle changes and medications don’t relieve the symptoms, or if symptoms get more severe with time, your doctor may order the following tests:

Endoscopy:
A sedative is given to the patient and a tube with a camera is inserted through the mouth, into the esophagus, to see the lining of the esophagus and stomach. This procedure takes about 20 mins and should be relatively painless.

Barium Swallow Radiograph (Esophagram):
This is a special X-ray procedure in which you are asked to swallow barium. The barium will coat the lining of your esophagus and stomach and will light up as white on the x-ray. This will allow your provider to detect if you have any structural or lining problems in your stomach or esophagus.

Esophageal Manometry:
A tube is inserted through the nose into the stomach and you are asked to lay down on your left side. The functions of esophagus and LES are assessed through muscle contractions detected by sensors.

pH monitoring:
A pH monitor is inserted into the esophagus through your nose and the acidity is monitored over 24 hours. A new wireless version of this test is being used now.

Surgery:
LINX device to help to avoid acid reflux by preventing stomach contents into the esophagus.
Fundoplication is applied to artificially induce valves on top of your stomach and strengthens the LES.

Acid reflux usually doesn’t cause complications, but continuous insult to the tissue of esophagus by acid in uncontrolled condition may lead to serious complications including:

Esophageal Strictures:
Narrowing of the esophagus and formation of scar tissue due to tissue damage. This narrows the pathway for food and water to travel through and can cause difficulty in swallowing.

Barrett’s Esophagus:
These precancerous changes to the lining of the esophagus are caused by continuous damage by the acid in the stomach. Barretts esophagus increases the risk of esophageal cancer.

Esophagitis:
Swelling and inflammation of the esophagus caused by irritation of stomach acid. Esophagitis may involve bleeding and ulceration.

Asthma:
Asthma and related complications can be made worse. This is because acid reflux is linked to chronic cough and breathing problems.