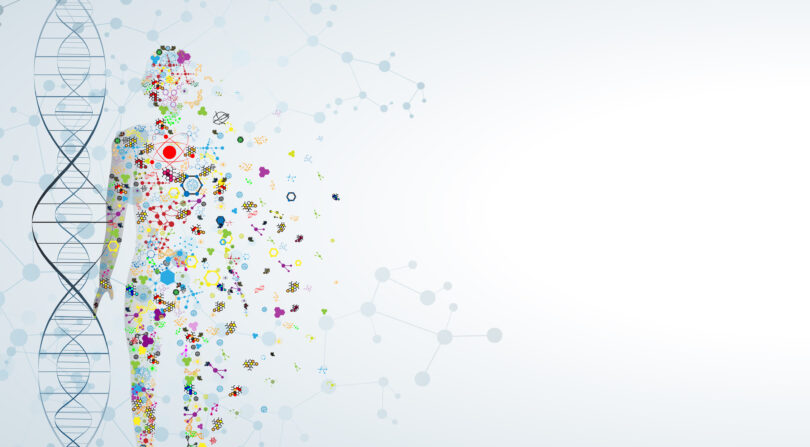 DNA can tell us a lot about who we are, how we look, what conditions we are predisposed to, and what medications are more likely to work for us, but can it also tell us what diet we should be on?

Personalized health care based on our DNA is becoming a huge health trend and those who promote the DNA diet claim that foods are no exception. The DNA diet is intended to increase the positive influence of nutrients on a person’s genetic makeup.

The scientific discipline on which these claims are based is called nutritional genomics, which as the name suggests, is the combination of nutrition and genomic science. Nutritional genomics also researches the influence of other lifestyle factors like alcohol use and smoking on the genome.

As we are all different and DNA is very much responsible for that, the idea of a personalized DNA-based diet does not seem like a bad idea. We can now figure out which medications will work for people based on their DNA, so why wouldn’t food be the same? The question is, do we at this moment possess enough knowledge in the field of genetics to accurately determine a proper diet for everyone in particular?

How does it Work

Getting tested is the first step. For this, you will have to supply a DNA sample. Usually, a DNA testing kit is sent to your home and a saliva sample will be required. In some cases, blood testing may be used instead.

The results of the DNA test will show you which foods you should eat and which you should avoid in order to get the most out of your diet. Supporters of the DNA-based diet claim that even some well-known diets, such as Keto, Paleo, Vegan, etc. are not good for everyone.

It is purposed that different genotypes respond differently not only on various types of food, but to physical activity as well. According to this, some people will be carbohydrate intolerant, while others will need caffeine. Some people can melt the fat deposits with intense training only, while others just need to move more. These are just some examples of all the information that DNA testing can provide.

Basically, the test will tell you if you are intolerant to certain food components such as lactose, gluten, caffeine, etc. It will also point out a possible sensitivity to fats and carbs, and help you to change your eating habits.

How the testing is done

The companies that offer DNA testing for diet purposes claim to be able to determine your recommended activity level and the way in which your body metabolizes various nutrients. After testing the sample they will send you back a report containing all the guidelines for your DNA-based diet.

The report will usually contain the following information:

· Nutrients your body can use best

· Diet composition (the perfect ratio between the proteins, carbs, and fats)

This type of DNA testing usually costs somewhere between $150 and $400, depending on additional services.

What is Nutritional Genomics

Nutritional genomics or nutrigenomics is a scientific discipline that studies the effects of nutrition on the human genome and general health. It is also the foundation of the DNA-based diet.

The goal of nutritional genomics is to understand the relationship between various single genes and different food compounds. This knowledge would allow us to fully understand how the body of each individual is affected by different nutrients.

The hope is that nutritional genomics will enable us to better understand and treat conditions caused by the lack of certain nutrients such as vitamins and minerals, as well as to combat obesity.

It is important to state here that the existence of a genetic predisposition to a certain condition, such as obesity, does not guarantee 100% that the condition will be manifested.

Like in the case of various diseases, when a genetic predisposition exists, behavioral and environmental factors such as lifestyle and diet play an important role in enabling the potential for obesity to manifest itself.

Nutritional genomics focuses on identifying these genetic predispositions as well as the nutrients which may enable them to fulfill their potential. By doing this, the risk of obesity and diseases associated with it can be lowered to a minimum.

The research needed to determine all the connections between the foods we eat and the specific genes of our DNA would be long, detailed, and tedious. The results, however, could revolutionize the way we eat.

The epidemic proportions of obesity in the modern developed society have put this condition in the spotlight of the nutritional genomics research recently.

The possibility that people with different genetic variations will respond differently to the same diet is very high. Nutritional genomics presumes that a genetic susceptibility to a certain diet can exist in the same way as it exists for certain diseases.

Single-nucleotide polymorphisms or SNP’s are often observed to support this claim. These single nucleotide variations which are present at specific positions in the genome are linked with different disorders. Obesity could be one of them.

Nutritional genomics explores the possibility that certain SNP’s are to be blamed for weight-gain in some individuals due to their responsibility for intolerance to fats or carbs.

What do the Critics Say

There are many critics of the DNA-based diet. Their main argument is that the diets recommended following the DNA testing often resembles the classic low-carb and low-fat diets. These critics argue that following such diets combined with an exercise regimen would lead to weight-loss with or without DNA testing.

Additionally, the critics state that the DNA-based diet approach is too complex even if it has the scientific evidence to support it. To determine such a diet plan would require excellent knowledge about genetics, all the possible underlying conditions and risk factors, as well as the family history of each individual, should be taken into account. To do this in an age when the main causes of obesity are obvious, such as physical inactivity and increased consumption of processed foods, seems to be unnecessary. Further more, we can already tell you which foods you are intolerant to with a simple food allergy test and are able to measure resting metabolic rate to get a good sense of our metabolism.

The rise in obesity is evident in the past several decades. It coincides with the increasing number of people living a sedentary lifestyle (house/car/office routine) and following an unhealthy diet (junk food). For these reasons, those who oppose the DNA-based diet are asking why this obesity epidemic should be attributed to a genetic factor.

The interaction between the environmental factors and genes is not disputed. The fact is that, theoretically, the risk of developing genetically predisposed diseases can be assessed. However, the critics claim that we are still far away from predicting the effects of different nutrients on our genes, especially on a personal level.

Some studies have been done in an attempt to test the DNA-based diet success rate. The results are both, encouraging and not.

Those studies that focus on finding a connection between the consumed nutrients and genetic predispositions for certain conditions are usually successful. This proves that the DNA diet is a concept that might have a future.

Other studies tested the effects of the currently available DNA-based diets to the effects of other popular diets (Keto, Paleo, Atkins diet, Vegan, etc.). These studies usually end up with less than encouraging results. This proves that we are probably not on a high enough scientific level to gather, process, and properly use all the relevant information about the gene-nutrient interaction.

A good example of such a study is the one performed at the Stanford University School of Medicine in 2018. In this study, the researchers tested 609 obese women and men. All participants were either young or middle-aged. They were divided into two groups: 1) low-carb, high-fat diet group, 2) high-carb, low-fat diet group

These two diet types were chosen because they are most commonly recommended by the companies that offer DNA diet testing. Both groups maintained a calorie deficit throughout the study.

All the participants were tested for their genetic predispositions and insulin levels were checked, but they were assigned to the groups randomly. The study lasted twelve months.

The results, in the end, showed that both groups lost almost the same weight during the study. This means that people with the presumed low tolerance for carbs were actually successful in losing weight on a high-carb diet. While those with “genetic fat intolerance” lost weight on a high-fat diet. The insulin levels did not affect the weight-loss process. Maintaining the calorie deficit, regardless of the diet’s composition, proved to be crucial for weight-loss.

The DNA-based diet is a promising concept that has its roots in actual scientific research. However, at this level of knowledge about genetics, and in the form in which it is marketed by various companies today, it is probably just as good as any of the other popular diets. This means that following a DNA-based diet might work for you, but your genetic predisposition will likely not have anything to do with that.