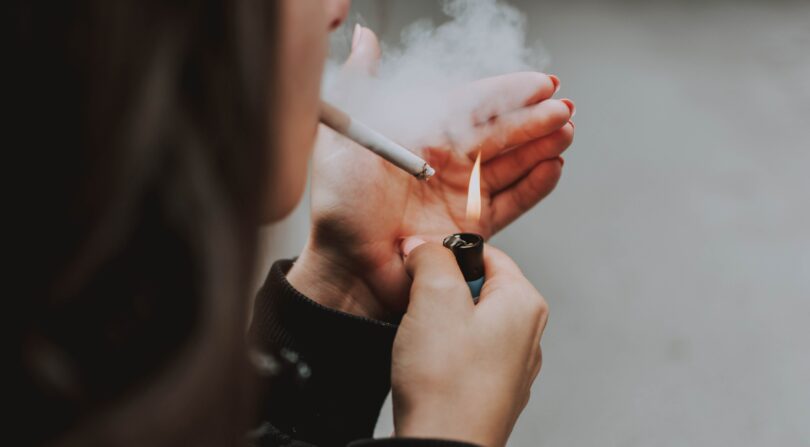 The respiratory system is one of the most intricate systems in the body. It begins in the nostrils of the nose, which contain small hairs that filter potential harmful particles when inhaled. In addition, the nostrils heat the air as it enters our bodies to ensure the right temperature for the airways.

The filtered air descends through the vocal cords, where it initiates a cilia system responsible for discarding any remaining microparticles that had not been previously filtered due to their smaller size.

Then, the air crosses the windpipe to reach both lungs. The lungs are composed of two tissues: a high in defense cells that keep the lungs stable and functioning and elastic tissue that allows for breathing to occur.

The bronchi, which are the branches of the lungs are further subdivided into small units of the respiratory system called the alveolus. The alveolus allows the filtered air to leave the lungs and enter our bloodstream.

The veins that reach the lungs transport toxins, CO2, and other substances that need to be discarded. The lungs allow these harmful components to exit our bodies as the veins connect with the alveolus tissue containing the pure and filtered air.

Through this interaction, the excessed CO2 is able to enter the alveolus and be expelled through the airways as oxygen-rich air enters the body, maintaining the vital functions of our organs.

It’s fair to say that the respiratory system does one of the most vital functions in the body. This process happens without consciousness.

When a person starts to exercise or faces a stressful situation, the muscles and other organs require more oxygen. In order to meet the higher oxygen demand, the brain sends multiple signals to the lungs to increase the respiratory pace without compromising the breathing process and allowing the person to fulfill the task.

Cigarettes are highly addictive, smokable tobacco. Since its discovery, consumption has been transformed into what we know today. Decades ago, it was believed that it was mainly made up of three ingredients: nicotine, carbon monoxide, and tar.

Today it is believed to be composed of at least 4,000 chemical substances, which negatively impact each of the tissues in our body, but especially the lungs.

When smoking a cigarette, the air that is being inhaled can reach temperatures of up to 140 °F. The hairs in the nostrils can’t neutralize that. As a result, the mucosa that covers and protects the tissue of the mouth, larynx, windpipe, bronchi, and lungs is continuously burnt with every inhale.

The hot air activates an inflammatory process, causing the defense cells to move to the affected tissues to fight the toxic cigarette chemicals. These cells secrete a protective substance to encourage new tissues to form to replace the areas that have irreversible damage.

Unfortunately, the damage created by a cigarette isn’t contained in the mucosa of the upper airway. It descends down into the lungs, reaching the alveolus. As the alveolus is compromised, the exchange of body waste and pure air is limited and toxic cigarette substances can pass to the rest of the organism.

One of these substances is tar, a highly viscous and dark substance. Once tar enters the bronchus, it adheres to the lungs causing limited flexibility in the tissue and preventing it from functioning correctly. Furthermore, carbon monoxide sticks to the cells in charge of transporting oxygen in our body, decreasing its ability to expel CO2, which prevents the lungs from producing its protective mucus.

Another substance, possible the most dangerous, is nicotine. When nicotine is inhaled, it’s slowly absorbed in the mouth and reached directly by the brain, triggering pleasure, happiness, and euphoria. Due to these satisfying feelings, cigarettes create a vicious cycle that leads to addiction. This powerful addiction leads smokers to underestimate the physical damage cigarettes can have in the body and continuously tricks the brain to go back for more.

Pregnant women are a vulnerable group that is mainly affected by cigarette smoke. During the pregnancies, mothers need to maintain a normal oxygen level to ensure the baby’s optimal growth.

If the mother smokes or lives in an environment of people who are continually smoking, her lungs are not going to be able to maintain the high demand for oxygen that the baby requires. Once oxygen levels decrease due to cigarette smoke, the baby’s health is compromised by higher chances of preterm delivery, miscarriage, and potential risk of developing long cancer later in life.

The most shocking factor of this habit is the effect that it has on the people surrounding the smokers, the secondhand smoke, sometimes called passive smoking. Every time bystanders are next to someone that is smoking; they inhale almost half of the particles contained in one cigarette; this number goes up to nearly 80% if the person is present when the cigarette is lit.

Unfortunately, smoking is not an individual habit. The smoker usually influences their family and closest friends to adopt this practice. This domino effect increases the risk of lung cancer in society, making it one of the most predominant types of cancer globally.

What is lung cancer?

Smoking is the number one, biggest risk factor for lung cancer. The good news is that the lungs are able to regenerate and heal a lot of the damage you endured from smoking, but you must quit now.

Even a few cigarettes here and there can increase your risk of lung cancer. Thus, the sooner you quit and the less total number of cigarettes you smoked in your life, the better chance you give your body and lungs to reduce the damage.

If you continue to smoke the lungs remain in a permanent state of inflammation. The burnt lung tissue will try to regenerate itself in order to sustain breathing. If, however, this process of regeneration is continuously compromised by continued smoking, abnormal and non-functional cells will develop instead.

These abnormal cells have the ability to replicate themselves at an exponential rate, given the weak state of the defense system. This destructive cycle leads to the development of lung cancer.

A tumor is formed when abnormal cells continuously and rapidly grow in the lung tissue. This mass creates pressure that prevents the alveolus, arteries, and veins from continuing their normal tasks. In addition, these systems will support the tumor by providing the necessary oxygen and nutrients that stimulate its growth.

Once the tumor is completely formed, it has enough strength to disseminate through other parts of the lung, changing the respiratory system’s normal architecture.

When the lungs become affected enough to start failing, the disease takes a protagonist’s role in the patient’s life. The day-to-day routine starts to become impossible to complete because there is not enough oxygen in the body. Other systems will begin to be affected by this abnormal situation as well. Unfortunately, symptoms don’t become apparent until this point, which might already be too late.

What are the symptoms of lung cancer?

The diagnosis of lung cancer is primarily performed on individuals with already existing symptoms. Thus, the majority of patients with lung cancer have advanced disease at clinical presentation. The symptoms may result from the local effects of a developed tumor or regional or distant spread.

The most common symptoms include:

· Coughing with or without blood.

· Chest pain that can be dull, sharp, or stabbing.

· Swelling of the face, arms, or neck.

Is there a test for lung cancer?

When doctors suspect that the patient could have lung cancer, they will ask about smoking habits, perform a physical exam, and a chest X-ray. If the chest X-ray shows a spot that looks like it could be cancer, they will follow up with additional blood tests, biopsy, and other imaging studies to be certain.

Just a century ago, cigarettes were the most trending product in the world. At first, they were mainly consumed by working men, but with the progression of time, everyone became a smoker. Cigarettes were portrayed as a very high and sophisticated accessory that made people feel powerful.

Additionally, in the past, cigarette consumption was not restricted. Restaurants, hospitals, airports, and planes were all appropriate places for public smoking. At this time, the negative health consequences of this habit were unknown. And as soon as evidence emerged to support this fact, the tobacco industry hugely invested in advertising campaigns to mask the truth and ultimately maintain consumers hooked.

Today cigarette smoking has been firmly established as the leading cause of lung cancer in industrialized North America and Europe. The possibility that inhalation of cigarette smoke might be a cause of lung cancer was first suggested in 1912. Since then, a large volume of scientific evidence has confirmed the relationship between smoking and lung cancer, which has led to efforts to decrease smoking in today’s society.

The cumulative lung cancer risk among heavy smokers may be as high as 30 percent, compared with a lifetime risk of 1 percent or less in never smokers, Meaning cigarette smoke increases the chances of developing lung cancer thirty times over.

The risk of lung cancer increases with both the number of cigarettes smoked per day, as well as the lifetime duration of smoking. Other factors that may influence the likelihood of developing lung cancer in smokers include the age at onset of smoking, the degree of inhalation, the tar and nicotine content of the cigarettes, and the use of unfiltered cigarettes.

Nowadays, most countries have very strong regulations about smoking in enclosed areas, which protects and decreases people’s exposure to secondhand cigarette smoke. However, it is still in the debate what additional actions governments can implement and pursue to reduce the smoking population that represents the most significant percentage of the hospitals’ mobility.

The most preoccupying aspect in the present day is that the young population, despite being aware of all the damage that comes from smoking, is still the biggest consumer of the tobacco industry. This fact brings a lot of worry regarding the attention that cigarettes continuously receive through elaborated worldwide advertising campaigns and the economic resources and media space that fuels this industry.

Can the outcome get any better?

New research shows that smokers who quit have a substantially lower risk for lung cancer than current smokers even within five years of stopping. The fact that lung cancer risk drops relatively quickly after quitting, compared to continuing smoking, provides fresh motivation and hopes. Smoking cessation may be beneficial even among patients who have been treated for lung cancer.

Quitting smoking has significant and immediate health benefits for men and women of all ages. The sooner the decision of quitting is made, the higher the benefits. People who quit smoking before age 50 reduce their risk of dying over the next 15 years by one half, as compared with those that continue to smoke.

To successfully stop smoking, the person may need multidisciplinary support and psychological therapy to manage the need and frustration that comes after quitting and prepare a plan along with family and friends that can help them achieve this goal.

The smokers should consult their physicians to learn more about new therapies that are available to ease abstinence symptoms, which are one of the leading causes of relapse through time.

The most popular form of replacement therapy is the nicotine patch, which allows the person to receive small doses of nicotine throughout the day without smoking. There are also nicotine gums, inhalers, and sublingual tablets with amazing smells, which helps the smoker associate it with a calm feeling. However, people often get hooked on the replacement therapy and then will need to wean off those as well, so it is important not to stay on these replacements for too long.

While quitting smoking may seem like a daunting task, with the support of your medical provider and loved ones, you can kick this nasty habit and quite literally save your life.